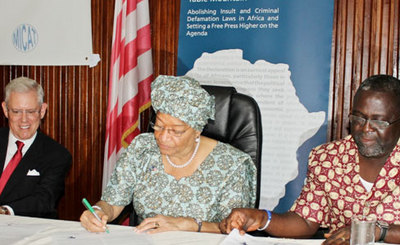 President Ellen Johnson Sirleaf has signed the Table of Mountain Declaration, as a necessary step towards repealing laws that hinder press freedom and other rights to free speech in Liberia.

Saturday, July 21 signing of the Table of Mountain by President Sirleaf now brings to two the number of African presidents thus far to affix their signatures to the instrument after it was first signed by President Mahamadou Issoufou of Niger.

The Table Mountain Declaration was initiated in 2007 by the World Association of Newspapers and Newspapers Publishers during the 60th World Newspapers Congress and the 14th World Editors Forum in Cape Town, South Africa.

The instrument urges governments and authorities in Africa to review and repeal laws on their respective books, calling for the prosecution of journalists and media practitioners under criminal defamation, thereby hindering free press.

Signing the instrument, President Sirleaf promised to ensure that the abolition of the criminal defamation laws will not only be limited to Liberia, adding she would encourage fellow African presidents to do likewise.


“Today, I will affix my signature on behalf of the government and the people of Liberia onto the Table Mountain Declaration to fulfill a pledge regarding our government acceding to the efforts towards repealing criminal defamation laws on our statues” Sirleaf said.

She noted “the move underscores a loud and clear message that we are committed to advancing free press and free expression not just in Liberia but to use our leadership role to promote it on the entire continent of Africa”.

President Sirleaf however frowned on media practitioners who she said were found of embarrassing the profession by engaging in ethical transgressions.

The President observed: “The all too frequent ethical transgressions by some of our media practitioners are embarrassing, worrisome and counterproductive to the very essence of why we are here today.”

She warned that if those who are responsible cannot address “the specter of bad journalistic practice by imposing strong-self regulatory measures to curtail this increasing rampant problem in the media, I fear this progress we have made could be undermined.”

She called on the Press Union of Liberia to act now by establishing self-regulating measures to ensure that the media acts responsibly. “Both of us have that responsibility, if this Declaration will be more than the piece of paper that I sign, or we can make it a living instrument to protect the rights of all – journalists as well as any other citizen,” she challenged Peter Quaqua, the PUL President.

Mr. Parkinson described the signing as a significant occasion not only for press freedom, but for all people of Africa.

“It will also provide for the enabling conditions that allow for sustainable, economic, social, political and cultural developments”, Parkinson said.

Liberia still has anti speech and media laws on its statues including Criminal Libel against the President, Sedition and Criminal Malevolence. The administration of President Sirleaf has used laws at least once in the last seven years.

It should also be imperative to subject to review, the PRC Decree NO. 46, under which, the Ministry of Information operates. This decree and the one creating the Liberia Broadcasting System were promulgated by the military regime of Samuel K. Doe is the 80’s.